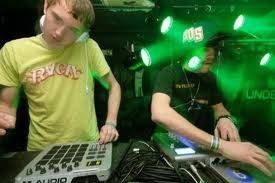 Doors open at 6:30PM
Share this event with friends!
FRESH2DEATH is the live musical collaboration of DJs Greg Fisk and Ben Samples. The Live Remix, Dual-Laptop performance brings an adrenalized, heart-pumping element that is missing in most standard DJ performances. The duo originally formed in mid-January 2009, but Fisk and Samples have a combined 12 years of DJ/Producing experience. Fresh2Death accentuates a wide spectrum of genres; Producing and remixing anywhere from Glitch-Hop, PsypHop, and Crunk-Hop, to the occasional DownTempo, Electro, or Dubstep track, Fisk & Samples are at the forefront of the Bass Culture sound. FRESH2DEATH is also now currently involved with the Denver Bass Squad, a collaboration of DJ's, Musicians, Producers, & Remixers all based out of the Front Range of Colorado. FRESH2DEATH has performed alongside many cutting edge Producers/DJ's such as Mimosa, Eliot Lipp, Ana-Sia, Lazer Sword, Dominic Lalli, L.A. Riots, The Passage Project, Free The Robots, Megasoid, Savoy, GSP, Lorn, Pretty Lights, VibeSquad, Two Fresh, Pnuma Duo, Future Simple Project, BreakBeat Buddha/Propa Tingz, Random Rab, Samiyam, Lunice, DJ Spectre, Boombox, Eskmo/Welder, Big Gigantic, Hovatron, Jantsen, and The Egg.
You must be signed in to add this to your order. Sign in here or create a new account.