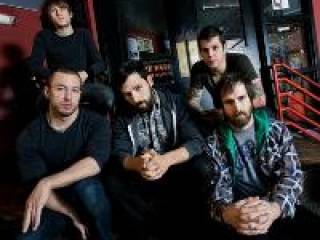 Doors open at 7:00PM
Share this event with friends!
with THE FACELESS & ROYAL THUNDER:
After five studio albums and countless tours around the globe, the Dillinger Escape Plan has earned much respect among fans and critics worldwide. With accomplishments such as coverage in mass media from the Rolling Stone to the New York Times, Billboard chart status, and performances on net work television such as Late night with Conan O’Brien, the Dillinger Escape Plan is often named one of the most important bands to have immerged over the last decade. The Dillinger Escape Plan evolved from the hardcore band Arcane around 1996. The initial lineup included guitarists Ben Weinman, and Derrick Brantley, bassist Adam Doll, drummer Chris Pennie, and vocalist Dimitri Minakakis. The band was nameless for many months until long time friend Matt Backerman decided to form Now Or Never records and asked the band to both perform on one of his underground basement shows and record what would be his and the bands first official release. They quickly, without much thought, chose the name “The Dillinger Escape Plan” while watching a documentary on the mobster John Dillinger. Brantley didn't end up showing when the band went to record the 6 song self titled effort with Producer Steve Evetts causing the band to record as a quartet. After a short self booked tour around the east coast with long time friend John Fulton on second guitar, the band quickly wrote and recorded the now infamous 3 song ep “Under the Running board” in 1998 which was released on Relapse Records shortly before Fulton exited the group to pursue his studies. During the writing of the band's debut full-length, to be release on Relapse Records in 1999, bassist Adam Doll was paralyzed in a car accident and unable to continue as a member. Using inspiration from his former band mates, Ben Weinman played most of the guitar and bass on Calculating Infinity, which received great response and reviews and was considered by many to be “an extremely innovative and groundbreaking album.” During the making of this album Jesuit guitarist Brian Benoit was recruited and bassist Jeff Wood, formally of M.O.D and Mind Eraser, joined the band leading to an extensive and lengthy touring period. After several successful tours, including Mr.Bungle and Warped, bassist Jeff Wood left The Dillinger Escape Plan, replaced by Liam Wilson. Then in 2000, vocalist Dimitri Minakakis departed the group. In August of 2002, an ep featuring friend and long time influence, Mike Patton, was written while the band was searching for a new full time singer. The material included on Irony Is a Dead Scene was subsequently recorded and released after new vocalist Greg Puciato was recruited. After touring with their new vocalist performing the bands already established catalog, and recording a few songs here and there for soundtracks and tribute albums, finally in 2004 the band recorded their first full-length featuring Puciato. Miss Machine sold well and solidified The Dillinger Escape Plan as one of the most creative and polarizing groups in metal. The next couple of years were filled with a lot of injuries and strife. Guitarist Brian Benoit had to leave the band because of a nerve injury. Weinman also suffered from multiple injuries including a torn rotator cuff and a broken vertebra sustained during a show in Anaheim CA during a tour in 2005. Despite many setbacks, the band released a digital EP Plagiarism in 2006, which was all cover songs and recruited Heads Will Roll Guitarist and lead singer Jeff Tuttle on second guitar. Then in 2007 while on the verge of recording their next album, drummer Chris Pennie quit and joined the band Coheed and Cambria. Without a drummer the band began programming drums before eventually being introduced to Gil Sharone. Gil proved to be more then able to handle the job and was hired to play on Ire Works. Ire Works was released in late 2007 to rave reviews. Former vocalist Dimitri Minakakis also appeared on one track as well as Mastodon’s Brent Hines. After touring the world in support of Ire Works, the band then decided to take some time off in order to secure a full time Drummer and write a new record. In 2009 it was reported that the band would be starting their own label umbrella called Party Smasher inc. and had parted ways with former label Relapse records after fulfilling their contractual obligations. It was also during this time that the band reported recruiting Billy Rymer as their full time drummer. The Dillinger Escape Plan released their fourth studio album, produced and recorded by long time friend Steve Evetts, entitled “Options Paralysis” in March 2010 through Party Smasher Inc and French Metal Label Season of Mist.
You must be signed in to add this to your order. Sign in here or create a new account.