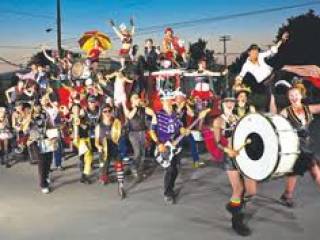 Doors open at 8:30PM
Share this event with friends!
with ATOMGA:
With a rallying cry of “JOY NOW!” MarchFourth Marching Band (known as M4 by its growing legion of fans) throws itself and the audience into a swirling volcano of high-energy music and spectacle. What began as a Fat Tuesday party on March 4, 2003 in Portland, Oregon has become one of the nation’s best live touring acts. Thanks to word-of-mouth will soon be graduating from “best kept secret” to a band on the brink of exploding in popularity. Whether at a family matinee in a small town in Colorado or a sweaty nightclub in New York City or a festival mainstage in Louisiana, MarchFourth wins over audiences of all ages at every occasion, and has consistently been named a “festival favorite.” Aside from the band’s marching band themed costumes, percussion corps and brass, M4 is far from a “marching band” in any traditional sense (though the band has been known to parade down Main Street before taking the stage). M4 is anchored by funky electric bass, and has been evolving into a more guitar- and vocal-driven musical experience. In one 90-minute set the band will take you on a journey from the swamps of Louisiana to the gypsy camps of eastern Europe to the African jungle by way of Brazil, along the way stopping to sample the deepest grooves of the best of American funk, rock, jazz and boiling it all together in cinematic fashion with high-stepping stilt-acrobatics and sexy dancers. This genre-busting approach is usually the territory of DJs, but this band is real people making music and art in real time—and every show is different. At the core of the band is its DIY ethic. The band has been writing and arranging all of its own material, designing and fabricating its own costumes and merchandise, developing its own choreography and managing itself from Day One. With the addition of their booking agency (Skyline Music) in 2010, M4 has been touring relentlessly. MarchFourth is akin to a team sport with a roster of nearly 30 performers to choose from, though the band tours with approximately 8 horns, 5 drummers, bass, guitar, and 5 dancers/stiltwalkers. The first two studio albums released by MarchFourth were recorded, produced and mastered entirely “in-house.” Their new release, Magnificent Beast (out 10/25/11) was produced by Steve Berlin (Los Lobos) and features a wide array of genre-mashing groove-based material that incorporates more vocals and guitar than previous albums. Following their 2009 release, Rise Up (a tribute to post-Katrina New Orleans), Magnificent Beast has now evolved into a full-blown big-stage brass-rock-funk assault peppered with moments of swing, jazz, bollywood, ska and metal. With so many members and writers, M4′s influences are all over the map, but fans of Sgt Pepper, Duke Ellington, Gogol Bordello, Ozomatli, and Cirque Du Soleil would likely feel at home in the audience. MarchFourth has shared the stage with a wide variety of acts, including Pink Martini, Budos Band, Balkan Beat Box, Trombone Shorty, Preservation Hall Jazz Band, Beats Antique, Bassnectar, Antibalas, Melvin Seals and JGB, The Motet, Hot Buttered Rum, and Yard Dogs Road Show. The band has also been climbing the festival roster, with return appearances at Wakarusa, Bumbershoot, Voodoo Festival, Telluride Jazz Festival, High Sierra, Wanderlust, Lotus World Music Festival, and Strawberry Music Festival, as well as recently appearing on ESPN’s Espy Awards (Los Angeles) and WGN-TV (Chicago). MarchFourth inspires dancing… when the audience can tear its eyes from the kaleidoscope of visual energy (and maybe even a crowd-surfing stilter) pouring from the stage. “Part New Orleans brass ensemble, part groove-heavy rock group, and part vaudevillian circus, this group unleashes such a technicolor experience that using the word ‘concert’ to describe their performance falls flat” (5820 Magazine). M4 provides the opportunity to come together in joyous union with a band whose mission is to seize the moment, bring communities together, and leave everyone feeling as if the world is a better place.
You must be signed in to add this to your order. Sign in here or create a new account.